In anticipation of the next holiday you are looking at different options and listen to the recommendations of friends and acquaintances. Godfathers went to Turkey, a member recently returned from Egypt, and how delighted your boss talked about the mysterious Thailand, where he rode on elephants! Did you know that there are places in the world, compared to which turns into the best way to relax? Do not believe me? Meet the Afar Triangle or hell on earth. 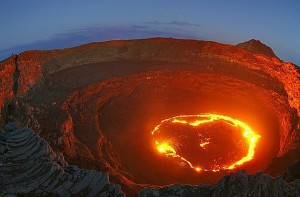 The appeal of the forbidden places

Ethiopia – one of the earliest countries to remember the heyday of the Egyptian kingdom. And the ancient remains of the first humans were found exactly on its territory. With that, it became the center of agriculture that part of the continent, it was a place that still terrifies the inhabitants of the planet. It is – or Danakilskaya Afar depression, which is one of the most dangerous places on earth. It includes the Danakil desert, salt lake Assal, the hottest place – Dallol, and the raging river Awash – the only area suitable for life in this terrible place. What is it so dangerous?

Firstly, hydrogen sulfide vapors. Constant movement of lithospheric plates lead to the formation of active processes sulfur. It is present everywhere, so even being on the territory already able to harm your health and reduce the years of his life.

Secondly, temperature. High, even very high, especially when combined with dry air. Your lungs will thank you for such a visit, and heat stroke – over the possible outcome of such an excursion.

Third, the constant eruptions. The temperature of lava, only to break out to the surface is such that, in contact with stones, it melts them. The landscapes are constantly changing, formed small volcanoes that are already capable of erupting.

That this is a vacation at this inhospitable territory. At the same time, every year a large number of people are paying large sums of money for a visit to this amazing place. After the unusual colors, unusual views and a magnificent sunset over the salt lake an unforgettable experience for years to come.