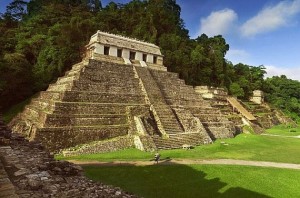 Palenque, old Mayan city, which is located in Mexico, Chiapas. The town of Palenque is built on quite a large area, it is also referred to as “the snake Castle” Maya. There were built many temples that are striking in their beauty and graceful forms. A special place among these monuments of architecture of the Maya takes Temple inscriptions.

Temple inscriptions has its name for a reason, of course due to the fact that almost everywhere it was found hieroglyphic inscriptions. This temple is a pyramid with nine platforms, the height of the building is 24 m. At the top of the temple, the sanctuary placed to rise to it must overcome 69 levels. Columns and walls of the temple have a picture, which depicts a woman with ugly babies, their faces close the mask, and from under the feet crawling snake. Maya mythology says that snakes are related to rain. On the walls of the temple are carved slabs characters, a total of 617, most of which have already deciphered. Long believed that performs the role of the sanctuary, but it turned out it was not. Was found stairs leading away directly into the depths of the pyramid, it was made of stone, coming down on it found dumping. 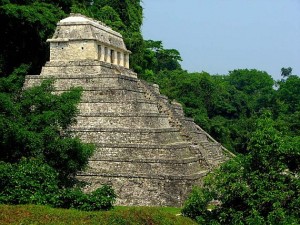 Also, it was soon found another hidden staircase Mayan pyramids, which was located under the base of the sanctuary. Below rested five men and women who have been killed violently. Dimensions burial chamber 9 × 4 m., And it certainly is already heavily overgrown. On its walls 9 shows human figures, all of them well and even richly dressed, indicating that their nobility. Their bodies were decorated with jewels, and in the hands of the figures was the scepter to the handle with the image of a snake. We can assume it has to do with the Mayan mythology, and it says here on the 9 masters of the world. Supports sarcophagus decorated with mythical creatures and the lid that covers the sarcophagus covered with a very thin thread of quality that says that this is truly the greatest work of art.